On August 25, 2017, Hurricane Harvey made landfall on the coast of Texas.  While it was predicted to hit the United States as less destructive tropical storm or Cat 1 hurricane, a number of factors combined to make Harvey extremely destructive.  First, Harvey strengthened as it approached land.  Second, the storm was slow-moving, so that it continued to drop rain on the coast.  Finally, Harvey’s rains hit one of the most heavily-populated areas of the United States.  Combined together, these factors made Harvey one of the most destructive natural disasters to ever hit the United States.

One of the reasons that Harvey was so destructive is that people did not have adequate time to prepare for the storm.  Harvey formed very quickly and was expected to make landfall as a tropical storm or, at most, a Category 1 hurricane.  The upgrade to above Category 1 status occurred very quickly before landfall.  Although local employers and school districts struggled to make arrangements for people to have time to plan adequately, people had less than 24 hours to plan for the severity of the storm.  Therefore, many people did not evacuate flood-prone areas, not because they were ignoring recommendations, but because they did not have time to do so before the storm hit. 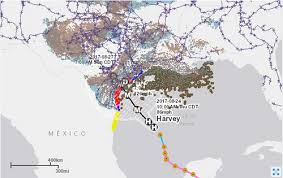 In addition, once Harvey’s severity was realized, it became clear that Harvey would bring a major flooding event.  This is because, despite the speed of its rotational winds, Harvey was a very slow-moving storm.  The weather pattern means that Harvey continued to pick up water from the Gulf of Mexico and dump it over the same area of Texas over a period of days.  These super-saturated areas experienced repeated episodes of flooding.  Each flooding episode impacted more and more areas, as the traditional flood drainage plans were overwhelmed by the sheer volume of water.

Finally, Harvey’s destruction would not have been as noticeable if it had hit elsewhere along the coast of the Gulf of Mexico.  Though it made landfall in a relatively sparsely-populated area of Texas, the “dirty” side of the storm, where most of the rain and tornadoes were expected, hit the metropolitan Houston area.  The metropolitan Houston area is the country’s fourth-most-populated metropolitan area.  The sheer number of people impacted intensified the storm’s destruction.

Combined together, a number of factors made Hurricane Harvey a significant storm.  First, the storm formed quickly and escalated to a Category 4 in a very short period of time, giving people inadequate time to prepare for it by evacuating.  Second, because Harvey was slow-moving, the flooding and tornadoes continued for days after Harvey made landfall.  Finally, Harvey’s location contributed to its destruction; it impacted the fourth-most-populated metropolitan area in the country.  Although it may be months before officials can begin to estimate the financial damages, the amount of injuries, or the death toll related to the storm, these factors make it clear that Harvey might be the most destructive natural disaster to ever hit the United States.

Outro Title “Is Climate Change Causing hurricanes to be More hurricaney?” Notice that word at the end of the title?  It’s not just made-up word, it’s a goofy-sounding made-up word.  But that’s okay! Sure, you might think Dr. Seuss had written it—so why did we use it? Because it’s fun—and it gets to the heart of what this essay is all about:  the essay’s main point is that hurricanes are going to hurricane—regardless of whether climate change or global warming are (or are not) occurring. Now look at the first line of the essay below:  that’s… Continue Reading...