Different Types of Essays to Write

Students will be asked to produce all types of essays throughout their academic careers. Depending on the class, these include persuasive essays, expository essays, analytical essays, argumentative essays, process essays, and more. One of the biggest mistakes students make is mixing them up and using the wrong one for their assignment. Writing essays is a lot easier when you understand the difference between them. Here is some clarification on the types of essays most commonly assigned at all levels of school, including high school and college.

A persuasive essay is one in which the author is actively taking a stand on an issue and wants to convince the reader to agree, primarily through the use of logic and evidence. Similar to an argumentative essay, a persuasive essay means that the author has a strong opinion but forms that opinion without resorting to the use of first person point of view. In fact, the terms argumentative and persuasive essay can be considered interchangeable (Baker, Brizee & Angeli, 2013; “Writing the Persuasive Essay”). When students are specifically asked to write a persuasive, as opposed to an argumentative essay, generally the topic will be less controversial or less issue-based and more related to extensive research conducted on a specific topic of interest. For example, a student might be asked to write a persuasive essay on the importance of John Woo’s films on the international cinematic landscape. A large number of scholarly essay assignments are persuasive essays, which are used in a number of different classes. To properly master the persuasive essay, it might help to first understand the basics of expository essay writing.

An expository essay can be considered the broader category under which many academic essays fall. In fact, most academic essays are expository in nature because they expose different elements of a subject. The distinguishing features of an expository essay include an introduction with a strong thesis statement that guides the paper, successive and organized body paragraphs that offer ample supporting evidence to prove the thesis, and a conclusion that wraps things up and offers insight into the subject. The Owl Purdue Online Writing Lab offers several tips for expository essay writing as well as general writing tips. Expository essays can be research-based essays or they can be analytical essays.

Many students will be asked to write an analytical essay, which is commonly used in literature and other humanities classes like art history. A type of expository essay, an analytical essay has an introduction, body, and conclusion and is thesis-driven. However, the focus of the analytical essay is a primary source text—such as a work of art or literature. The goal of the analytical essay is to systematically pick apart the work of art or literature around a central idea, such as by identifying the author’s main theme and the literary devices used to develop that theme. For example, an analytical essay could be about the use of heavy brushstrokes to convey mental turmoil in the works of Van Gogh, or the use of symbolism to convey the theme of colonialism in Conrad’s Heart of Darkness. Sometimes, but not always, an analytical essay will also require that the student use a number of secondary sources to support the thesis or to create a more research-oriented analysis of a text. Secondary sources refer to what other people—usually scholars writing in peer-reviewed journals or books—have to say about the primary source.

Not all analytical essays are about literature or the arts. Some analytical essays require the student to analyze a concept or theory in the social sciences or a specific issue in history. An analytical essay will look at an issue from multiple angles and help the reader to develop a deeper understanding of key concepts and terms. Analytical essays usually require some degree of research, and can also be argumentative in tone. 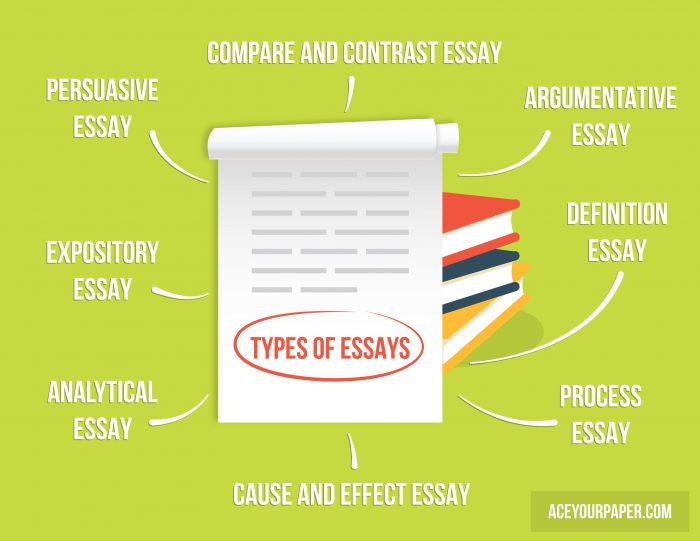 One of the most common techniques is to combine pathos, ethos, and logos, three Greek terms referring to emotionality, credibility, and logic, respectively. Emotionality or pathos can be conveyed without the use of first person by employing strong diction, vivid or graphic imagery, and an assertive tone in the essay. It can even be appropriate to shock the reader into adopting a point of view using pathos. Ethos, on the other hand, refers to the credibility of the argument and its source material. If the student lacks personal credibility, then it becomes critical to refer to authoritative sources on the issue such as scholars, scientists, or industry experts. Logos refers to the rational, objective arguments and facts that substantiate the argument. Combining pathos, ethos, and logos creates a tight and persuasive argumentative essay about any topic.

Cause and Effect Essay

A cause and effect essay may be common in social science and history writing, because students may be asked to think critically about what caused an event or what causes a phenomenon by postulating potential causes or precursors. Similarly, students may be asked to speculate on the potential effects of a specific issue or phenomenon. For example, a history cause and effect essay could be about the causes of the American Civil War, or the effects of the Civil War on the culture of the Southern United States. Healthcare is another subject area that might rely on the cause and effect essay, such as in showing how genetics, hormones, or the environment cause specific diseases or conditions. As an expository type of essay, the cause and effect essay avoids using the first person point of view, and follows the standard organizational structure using an introduction, body, and conclusion with a strong thesis statement driving the main argument.

A less common type of expository essay is the definition essay. When asked to write a definition essay, students will need to hone in on a specific word or phrase and trace its origin and application. Often definition essays are more complex than they initially seem because they ask students to consider the semantics of various words and phrases and the different ways those terms are used depending on geographic or temporal context. An example of a definition essay might include defining the term “globalization.” The student will be expected to do research and discover what scholars or experts in the field have said about the term, or to draw conclusions about the definition of the term based on how it is used in common discourse or in the news media.

A cornerstone of technical writing, a process essay will explain how and also why a certain procedure progresses from start to finish. The process could be anything from how to cook shakshuka to how to fix a broken motorcycle. When writing a process essay, the student will usually need to describe the process in a series of chronologically organized steps as in “first you do this, and then you do that.” A process essay can also be more expository in nature or research-based. For example, the student might describe the process of psychoanalysis or the process of digital filmmaking.

Expository, analytical, persuasive, argumentative, process, definition, and cause and effect are only a few of the types of essays students will be asked to provide at various stages of their academic careers and in different courses. It helps to become familiar with the different types of essay because they are all relevant in different situations or different classes. Almost all types of expository essays will be written in the third person, unless the student is advised otherwise. Likewise, almost all academic essays need to be well-organized, driven by a strong thesis statement, and referring to scholarly resources while also following the stipulations of academic integrity.