Ever want to get involved in a knock-down, drag out, all-out-war of words?  Okay—so maybe not—but sometimes you have no choice.  Part of growing as a writer is showing that you have the ability to stake yourself to a claim and argue it effectively.

That doesn’t mean you need to produce the rhetorical equivalent of punching your opponent in the nose—no!  The art of the argumentative essay is about using logic to convey the rightness of your stance.

In this article, we’ll discuss how to do that—but first you’ll need to wade into the pool of argumentative essay topics to find one right for you.  See below for list of 100 topics to help spark your imagination.

When writing an argumentative essay, it is your opportunity to take a position on an issue and make the case for why it is the correct position to take.  If you don’t have a position, your argument will come off as weak and poorly constructed—so when you go to choose an argumentative essay topic make sure it is one that you both feel strongly about and also can make a reasonable case for.

To get started, think of a topic, an issue, an idea, a book, a film, a political concern, an economic matter, a social problem—anything that gets you fired up—and then mine that subject to write your paper.  You’ll want to research the subject, of course, because even the best lawyers go to trial prepared with evidence and support from witnesses who can help make the case.  Arm yourself with what others have said about the subject and you will show your reader (the jury of your peers) that you know what you’re talking about.

The more research you do, the more convincing you can be and the more your argumentative essay will succeed.  And—just like a prize trial lawyer—you have to anticipate what your opponent will say in response, so be prepared to offer a rebuttal to counter-arguments and do so in your paper.  In this way, you’ll cover all your bases and hit a home run of an argumentative paper every time.

An argumentative essay should open with a question that frames the issue that you will argue.  Most issues have at least two sides, so in the opening paragraph make clear what these sides are.  Then, in your thesis statement (which can come at the end of the introductory paragraph), state which side of the issue you will defend and how you will do it (giving a brief description of the evidence you have gathered).

The body paragraphs that follow should provide your supporting arguments, which must be based on the research you have conducted.  The first few paragraphs should each address one of your main points, providing details and evidence that makes the point convincing.  Transition words and joints can help link your data and claims to one another.

Finally, give a conclusion that restates the purpose of your paper using different words.  The conclusion can re-state the reasons your argument is better than the opposing argument, summarizing the evidence in succinct terms.  The conclusion should be roughly the same length as the introduction and simply boil down the main points of the paper in a few sentences.

High school argumentative essays should focus on issues that are important to high school students.  These can range from problems they face in their own lives, such as risk factors that can lead to bad decisions and why they should be avoided, to subjects that impact the broader community.

Many people feel strongly about sports, which play a very dominant role in modern society, so this can be a great place to mine for an argumentative essay topic.  Sports topics can focus on anything from the nature or safety of a game to the fundamental problems relating to a particular sport.

College is a place where ideas gain a foothold.  Differences are discussed, arguments are made, and new directions take hold.  Everything from the issue of free speech to the cost of living is fair game for a college topic.

Education topics can serve as a great subject for an argumentative essay because there are so many differing views on how education should be conducted.  When considering an education topic think about your own experiences and build on what you know by diving into research and scholarly databases that have published academic articles about the issue you want to argue.

As Shakespeare said, music is the food of love…but he also noted that love is in the eye of the beholder—so it stands to reason that there should be some disagreement about the merits of different types and genres of music.  This makes music topics a terrific source to mine for an argumentative essay.

Racism is a big issue in America, mainly because of the various ethnic strains that have come together over the years and the biases that these strains have projected into the American experience.  It’s a good subject to argue over as there are many sides to it.

Good topics for an argumentative essay are those that provide stark contrast between two opposing sides—an either/or situation in which you are either for an issue or against an issue.  Good topics are generally subjects that are frequently argued but never fully resolved by commentators.  In fact, the more a topic has been argued in the past, the more likely there are to be a lot of good articles and books that you can read to find information to support whichever side you favor.

If you’re looking for an easy topic for an argumentative essay just start off by thinking about the typical clichéd arguments that you’ve already heard a thousand times before.  Then try to decide if you can actually think up some good reasons why one side should be argued over the other.

The reason controversial subjects are controversial is that there are usually good arguments to be made for either side of the debate.  As the writer of an argumentative essay, it is your job to become familiar with both sides, decide which to argue for, and then use evidence and supporting facts to show why the other side’s argument is illogical.

Interesting argumentative essay topics will differ according to one’s personal taste—but anything that raises a question with the status quo will likely be of interest to a reader.  To be interesting, all an argumentative essay has to do is pique the readers’ interest.  Pay attention to what’s going on in the media, choose a popular subject and weigh in on it with facts to support your case.

Funny topics can an alternative way to approach the argumentative essay.  While many people may expect a serious subject from students, there’s no harm in taking on a humorous subject—so long as it is treated with the same sobriety and formality.

Current event topics are always a great place to start because these are timely issues that are fresh in the minds of many and being explored by researchers and writers in numerous formats.  It is very easy to find information to support your argument when your subject is a current event.

History is full of stories that are up for interpretation—and for that reason history makes for fertile soil when it comes to picking an argumentative topic.  Choose an era or a particular event in history and then argue why it happened or what it led to.  In other words, show that history is significant and that the events of history can be judged in a meaningful way. 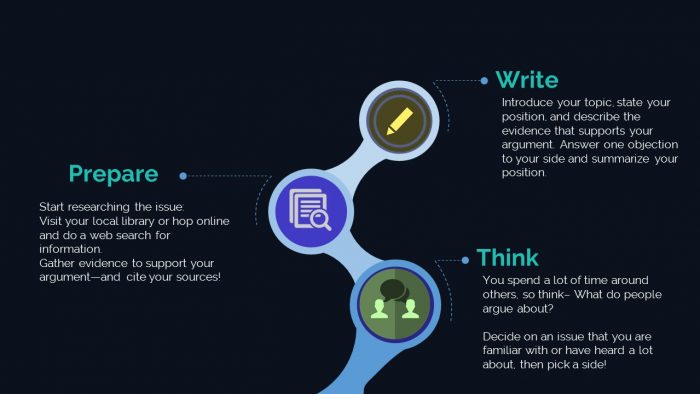 Argumentative essay topics are easy to come up with—just think of something that you want to convince others of and then go for it!  Your argumentative essay may not be exactly a roundhouse kick to your opponent’s head—but it doesn’t have to be:  it’s really just a way for you to use your rhetorical skills to express a convincing point of view supported by research.  The purpose of the argumentative essay is not to beat your reader over the head with your opinion but rather to provide solid evidence, convincing analysis, and respectful, formal wording that will sway your reader to your side based on the validity and legitimacy of your reasoning.