Engaging in a Bartleby, the Scrivener analysis essay is bound to test one’s patience. It is one of the most inscrutable works of Herman Melville. While Melville is perhaps most famous for his nautical adventure tales, this paper delves into the enigmatic cogs and wheels that make this short story a piece of eternal literature. Eternal literature transcends the constraints of time and relatability, touching upon themes and symbols that are indelible to human existence. This paper summarizes the major events of the short story, briefly addresses the main characters, and examines the more predominant themes.

Bartleby, the Scrivener by Herman Melville is one of his most elusive and compelling short-stories, one that most critics deem to be his ultimate masterpiece. One of the main reasons that critics herald it as such a masterpiece is because it can be interpreted in so many ways—as a supernatural tale, as a psychological projection, as a comedy of the modern workplace, as an indictment of the modern workplace, as a meditation on the human condition—and numerous other interpretations. It’s also important to note that this story was a break from Melville’s more typical adventure tales of the era. Instead, he sought a razor sharp stare into the mundaneness of the human condition, suggesting answers to the most mysterious conundrums. Literature is after all the study of human existence, and this short story highlights the incomprehensibility of the minutia of human interaction in the workplace. Delving into Bartleby, the Scrivener in an analysis essay empowers the reader to be illuminated by the numerous cogs and wheels that make the short story an evaluation of capitalism in America, 19th century labor relations, stifled homoeroticism or a coded enigma for one of the many texts that influenced Melville (Kahn). To analyze this masterpiece is to commit to confronting its elusiveness, mercurial nature and the paradox at its core. Humans need to protect their individuality and still encourage their sense of social interdependence in order to survive. Bartleby, the Scrivener shows what happens when individuality is selected over all else to the point of self-destruction. This is but one interpretation of a multi-faceted work of art, of which many interpretations may emerge. 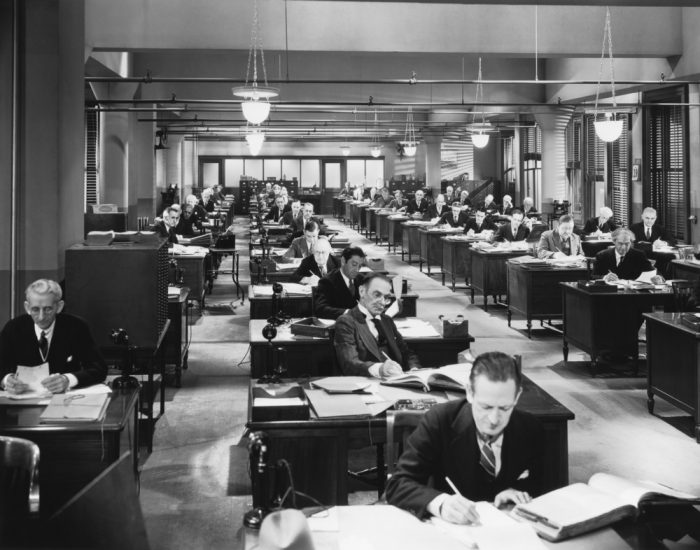 At its starkest construction, Bartleby, the Scrivener refers to the story of how an attorney with a thriving business servicing the legal needs of wealthy men, hires a scrivener to help with the enormous tasks of copying. The title character is hired and his personality and demeanor are well described: “In answer to my advertisement, a motionless young man one morning, stood upon my office threshold, the door being open, for it was summer. I can see that figure now— pallidly neat, pitiably respectable, incurably forlorn! It was Bartleby” (Melville, 6). With this description there’s a strong sense that Bartleby is small in size and withdrawn, introverted. Initially, Bartleby demonstrates his intense productivity as a copyist, as he is able to complete “an extraordinary quantity of writing.” However, even in this initial stage of extreme productivity, there appears to be a foreshadowing of the disappointments that lay in store.

“As if long famishing for something to copy, he seemed to gorge himself on my documents. There was no pause for digestion. He ran a day and night line, copying by sun-light and by candle-light. I should have been quite delighted with his application, had he been cheerfully industrious. But he wrote on silently, palely, mechanically (Melville 6).” In this description, Bartleby is like a machine before a collapse, like a car running at peak speed before the transmission dies. In this case, he is an employee before the collapse of total burnout.

Things continue to unravel when Bartleby is asked to engage in office tasks outside of copying. In these tasks Bartleby asserts that he “prefers” not to—much to the unified shock of his boss, the narrator, and everyone else in the office. Nothing can sway Bartleby, not common sense nor logical appeals. He is resolute in his answer.

Through the narrator we discover that Bartleby actually lives in the office, though he does this in a markedly pitiful manner. By examining Bartleby’s work space, the narrator finds that he is eating, dressing and sleeping in the office, but without the proper tools and accessories to make this feasible. Scrutinizing a rickety sofa, the narrator finds that it “…bore the faint impress of a lean, reclining form. Rolled away under his desk, I found a blanket; under the empty grate, a blacking box and brush; on a chair, a tin basin, with soap and a ragged towel; in a newspaper a few crumbs of ginger-nuts and a morsel of cheese” (Melville, 13). Based on these details, it is as if Bartleby has created some sort of self-imposed prison in his work space. 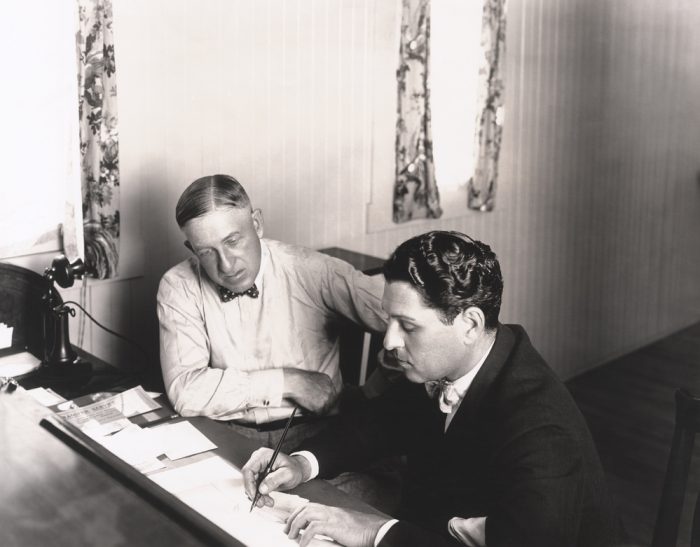 The narrator is deeply moved by this, in part because of the poverty it strongly suggests, and in addition because of the crippling loneliness and isolation that it indicates for Bartleby. This office copyist was living a life of exile, not just from friends and a stable domestic life, but also isolating himself from the rest of the world. As the narrator is apt to point out, the solitude that Bartleby experiences must be all-encompassing: “Think of it. Of a Sunday, Wall-street is deserted as Petra; and every night of every day it is an emptiness. This building too, which of week-days hums with industry and life, at nightfall echoes with sheer vacancy, and all through Sunday is forlorn” (Melville, 13). Anyone who has ever been to a downtown office area on the weekend can attest to this, such areas are usually devoid of people. Profoundly moved and saddened by this discovery, the narrator seeks to find out more about his copyist. However, that proves to be futile. In asking Bartleby the most rudimentary question about himself, he receives that same reply, “I would prefer not to answer.”

The narrator finds out that after moving to new offices, Bartleby was evicted from the previous chambers, and took to haunting the building and scaring other tenants and clients. This was done by sitting on the banister of the stairs and being an unmovable, bizarre presence. The narrator returns to his old offices and confronts Bartleby, attempting to do anything possible to get him to move. He suggests other careers, to which Bartleby dismisses. He even invites Bartleby to his home for him to stay until a more convenient plan was made for him. Bartleby dismisses all of these options. Eventually, the narrator finds that his former employee has been sent to prison (“to the Tombs as a vagrant”). The narrator attempts to comfort him: Bartleby rejects it. The narrator gives the cook some silver to make Bartleby’s meals extra special: Bartleby refuses to eat. We are left to assume that Bartleby and his gray eyes starved to death, wasting away. As a side note in closing the story, the narrator informs the reader at the end that before becoming his clerk, Bartleby worked at the post office in the dead letter branch. He sorted through dead letters, known as undeliverable mail. One is left to speculate about the impact the dead letters had on his mental health.

As already stated, there are numerous ways to analyze this text. Some scholars have interpreted it as an antiquated “Occupy Wall Street” story, as Bartleby continuously demonstrates his ability to remain in the office, yet not engage in a single thread of productivity (Greenberg). Melville’s narrator is an attorney for the one-percenters of 1800s New York, engaging in “a snug business among rich men’s bonds and mortgages and title-deeds.” The word occupy does occur vigorously throughout the text, and it first occurs as a pleasant status. The narrator is initially happy with the consistency of Bartleby’s occupation of his office, since the copyist works with fervor. “When Bartleby stops working, the lawyer wonders, like a weak-hearted Bloomberg, whether he should evict the stubborn copyist” (Greenberg). Bartleby’s refusal to work grips the narrator in the uneasy notion of when does the occupier of Wall Street transform into the possessor (Greenberg): “The idea came upon me of his possibly turning out a long-lived man, and keep occupying my chambers, and denying my authority.” There’s the pervasive anxiety throughout the text that Bartleby will be able to gain hold of the office, simply by virtue of the fact that he persists in occupying it.

This anxiety is made apparent in the passive power held by Bartleby: even after the narrator moves to new offices in another building and Bartleby is forced out of his old boss’s chambers, he persists in occupying the stairwell, sitting on the bannister. The general inscrutability of Bartleby’s decisions creates a hyper focus on the repetition of the words he does use. “Bartleby’s ‘queer word’ of choice, to prefer, injects into the story a defiant note of desire, shifting our analysis of his occupancy from economic rights to preferences and wishes” (Greenberg). The narrator continues to struggle to understand Bartleby and balance legal obligations against ethical ones, never clear on why Bartleby seems to have no interest in the money he is offered or is owed. The frustrations that Bartleby’s actions force upon the narrator (and on some readers) place a hyper focus on his motivations and actions. “By refusing to articulate specific demands, Bartleby defies the very terms on which Wall Street does business. Melville thus provides a prescient illustration of the force of the Occupy movement” (Greenberg). Many have found that the Occupy Wall Street (OWS) movement has gained its political power by precisely withholding a list of demands from the confines of self-definition that might minimize the force of the movement and allow it to be marred by ordinary politics (Greenberg). The enigmatic quality of Bartleby, one could argue, and its disinterest in quick cash fixes, may be its most formidable strength.

The Great Gatsby Essay (Completed in 2020)

To Kill a Mockingbird Essay

Should College Athletes Be Paid Essay