Case Facts: Ernesto Miranda was arrested and locked up in a Phoenix police station on March 13, 1963 where he was identified by a complaining witness (Samaha, 2012).  Law enforcement officers took him to an Investigation Room where he was questioned before the two officers came out with a written confession that he signed.  During the questioning, Miranda was not notified that he had a right to an attorney and was notified of the need for voluntary confession after making his oral confession.  The written confession was then admitted into evidence at his trial before a jury despite objections from the defense counsel.  The court then found him guilty of kidnapping and rape and sentenced him to 20 to 30 years in prison for each count, with these sentences running simultaneously.  This ruling was upheld by the Supreme Court of Arizona following Miranda’s appeal on the basis that his constitutional rights were not violated since he did not specifically request counsel.

Issue: The issue was whether police officers should notify arrested defendants of their constitutional rights against self-incrimination under the Fifth Amendment to the U.S. Constitution before interrogation.

Arguments or Objectives of the Parties: The defense counsel representing Ernesto Miranda objected the admission of the written confession into evidence on the basis that Miranda was not notified of his constitutional rights under the Fifth Amendment. This argument was based on the fact that police officers admitted that they did not advice Miranda of his right to an attorney and read out his right to voluntary confession prior to obtaining an oral confession from him.  Therefore, the objective of the defense counsel was to stop the admissibility of the written confession into evidence.  On the contrary, the State of Arizona contended that Miranda’s Fifth Amendment Constitutional rights were not violated because he did not specifically request counsel.  This argument was made to help ensure that the written confession was utilized as evidence to incriminate Miranda for his crime. 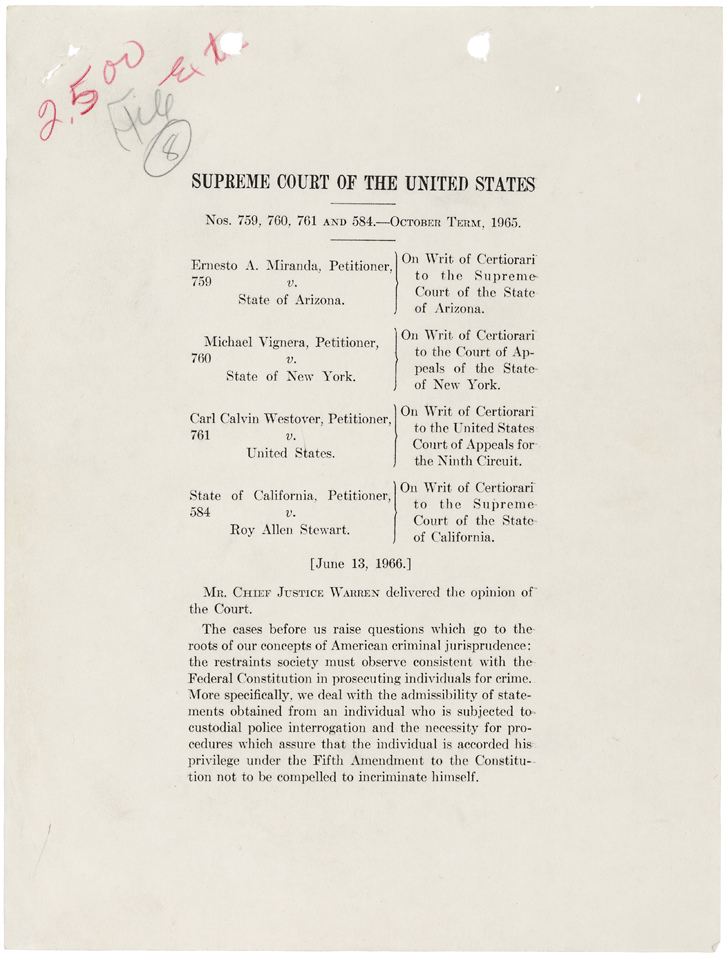 Holdings: In a split 5-4 decision, the Supreme Court ruled that law enforcement officers need to advice arrested persons of their Fifth Amendment constitutional rights before interrogation.  Arrested individuals need to be notified of their right to remain silent, right to have an attorney or counsel appointed to represent them, and an explanation that any utterances could be used against them in a court of law. The absence of such notification/explanations implies that any confessions by an arrested individual during interrogation will not be admissible into evidence. The dissenting judges led by Justice Tom Clark contended that Due Process Clauses in constitutional amendments are applicable to interrogations.  Additionally, they argued that the provisions of the Fifth Amendment relating to self-incrimination are never geared towards prohibiting any and all efforts towards self-incrimination.  These judges also argued that the majority was making new laws because of the lack of historical support for wide application of the Fifth Amendment (Samaha, 2012).

Rationale: The Court’s decision was based on the fact that the Fifth Amendment is applicable to situations outside criminal court proceedings and seeks to safeguard individuals across all settings where their individual liberties could be restricted in any major way by being forced to self-incrimination.  In this regard, the prosecution’s use of inculpatory or exculpatory statements obtained from custodial interrogation as evidence in a court can only be allowed if effective procedural and legal safeguards are utilized to protect an individual against self-incrimination.  The failure to use such safeguards significantly undermines and/or interferes with the individual’s will to resist and may force him/her to speak in a situation where he would prefer to remain silent or have an attorney/counsel representing him/her.