Mixed between the alarming headlines of terrorist acts on the global stage and those concerning the strangest U.S. presidential election in history are increasing reports of people of all ages and walks of life engaging in one of the hottest new games to hit the market in recent years, Pokemon GO. Indeed, even the mainstream media appears to be caught up in the craze, and curious consumers are joining the Pokemon GO throngs in pursuit of elusive but valuable wild Pokemon characters they can “catch” with their mobile devices in real-world locations. Moreover, growing numbers of local businesses are reporting increases in sales due to congregations of Pokemon GO players and it is reasonable to suggest that the tip of this economic iceberg has not been exposed yet. Given this explosion in interest, this paper provides a discussion concerning this augmented reality game to learn what all of this fuss is about, followed by a summary of the research and the implications of this phenomenon in the conclusion.

What is Pokemon GO?

Based on a Japanese character released in the 1990s, Pokemon GO is a type of augmented reality technology that incorporates various interactive elements. Augmented-reality interactive technology (ARIT) overlays computer-generated three-dimensional (3D) visual and auditory effects on to real-world settings to provide users with a realistic but enhanced experience that can include shopping, gaming or training activities (Huang & Tseng, 2015). One company that has applied ARIT in a particularly innovative way is Niantic, the company responsible for launching Pokemon GO in the United States, Australia and New Zealand, followed by a host of others around the world (Break out the sneakers and Poke Balls!, 2016). Since its launch in July 2016, the game has become the virtual equivalent of the hula hoop, generating millions of sales in the App Store and Google Play stores. According to Etherington (2016), millions of Pokemon GO apps have been sold to date, generating more than $1.6 million in daily revenues for Niantic. In fact, Pokemon GO reached 50 million downloads faster than any digital game in history (Li, 2016).

In very sharp contrast to the hula hoop which sold 25 million units within 4 months of launch but suffered rapid loss of interest thereafter (Who invented the hula hoop?, 2016), though, Pokemo GO appears to have the potential to remain popular far longer, perhaps even becoming a permanent fixture in the gaming community. In this regard, Etherington (2016) notes that, “Obviously, there’s going to be some drop-off as the hype wears out, but Pokémon has a number of benefits that could add to its stickiness, including a beloved [internet protocol] and ample avenues to expand its content offerings” (para. 3). In addition, Niantic recently announced that the game would receive ongoing updates, including new features and the addition of Pokemon characters from other generations as well as a market where players can conduct trades (Li, 2016). There are also plans underway to improve the functionality of the game’s other features such as “Pokestops” where players collect valuable items such as “Pokeballs” that are used to capture Pokemen (Li, 2016).

Some indication of the current popularity of Pokemon GO can be readily discerned from the fact that consumers are spending more time playing the game versus their use of popular social media apps such as WhatsApp, Instagram, and Snapchat (Schwartz, 2016). Indeed, Taveres (2016) emphasizes that, “Pokemon GO has taken the US by storm, to put it mildly. For an app that was released very recently, it already has more users than Twitter” (p. 3). Taken together, this otherwise-innocuous game has become a major source of entertainment for millions of users worldwide that has generated millions of dollars in revenues for Niantic. Contributing to this explosion in popularity is game’s intuitive interface which depicts the user’s customizable avatar and options as shown in Figure 1 below. 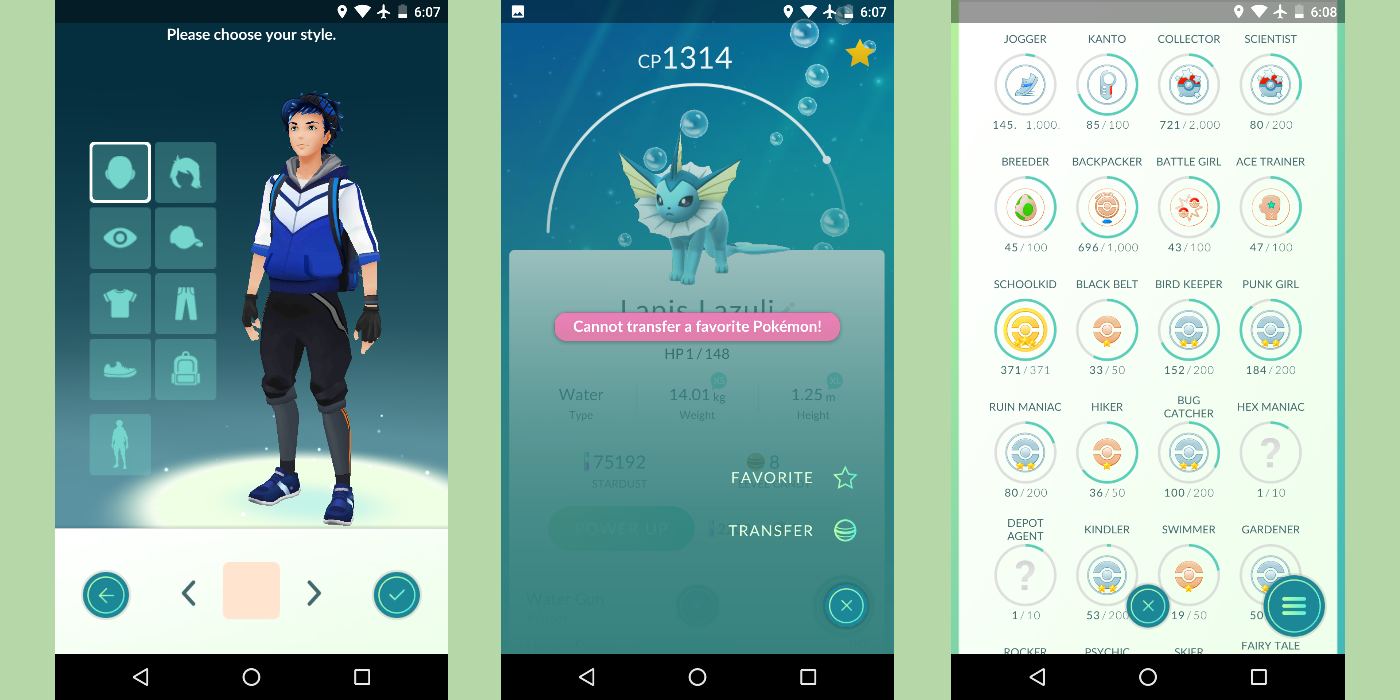 Following its release in the U.S. market, Niantic made the Pokemon app available in European markets and has started releasing it through Asia (Li, 2016). Reports from industry analysts indicate that the Pokemon GO Plus wearable accessory that allows hands-free play of the game will be available from Nintendo beginning in September 2016 (Li, 2016). According to Li (2016), “The Plus will alert users to nearby Pokemon without opening the app, and it will even have the ability to catch Pokemon with a simple click and without having to throw Pokeballs” (para. 4). The Plus accessory is expected to be priced at around $35 (Li, 2016) and it will likely only be a matter of time as well before other wearable Pokemon GO accessories such as visors or sunglasses will be introduced which will make the game even easier to play.

The Future of Pokemon GO

Although about half the gaming population is female, Pokemon GO represents a dramatic shift in focus for the gaming industry since it targets both male and female players equally (Macheel, 2016). Further, the toxic environment that existed for female players in many previous virtual games has been replaced with a gender-neutral scenario in which males and females can play and compete with equanimity (Macheel, 2016). In addition, the game is well suited to the working schedules of both men and women since it can be played anywhere, anytime (Macheel, 2016). The game has also been lauded because it requires players to engage in activities that contribute to their physical fitness (Macheel, 2016).

Moreover, growing numbers of local business across the country are reaping the benefits of the Pokemon GO craze by sponsoring game contests and events that have attracted tens of thousands of avid players (Chen, 2016). Likewise, many small businesses have used the highly cost-effective features available in Pokemon GO such as inexpensive “Lures” (available for less than $1) that attract new players and therefore potential customers to the area (Chen, 2016). In other cases, small businesses have used customizable Pokemon Gym badges to promote their companies while others have capitalized on their existing locations that are near Pokemon Gyms and Pokestops to promote competition between teams by using a prominently placed scorecard (Chen, 2016). Taken together, it is clear that Pokemon GO has assumed an increasingly central part of many American’s lives today, and the same level of enthusiasm can be expected in other international markets as well.

Easy to learn and fun to play, Pokemon GO has become a nationwide craze in the United States in recent weeks. In fact, Pokemon Go reached 50 million downloads faster than any digital game in history, generating millions in profit for Niantic. Current signs indicate that the game’s popularity will continue after the initial media hyperbole fades thanks to the addition of new features and accessories that will excite and retain existing players while attracting even more new ones. Although it is reasonable to conclude that the game developers at Niantic could not envision the enormous popularity their game would enjoy, it is also reasonable to conclude that their tremendous economic success has attracted the interest of countless others who want to jump on the Pokemon GO bandwagon to reap their share of these benefits.

We hope this example Pokemon Go essay will provide you with a template or guideline in helping you write your own paper on this topic.  You are free to use any information, sources, or topics, titles, or ideas provided in this essay as long as you properly cite the information in your paper and on your reference page.