In what is shaping up to be the strangest election in United States history, the contest between the Democratic nominee, former U.S. Secretary of State Hillary Rodham Clinton and the Republican nominee, billionaire real estate developer Donald J. Trump is being closely monitored by U.S. voters and an increasingly concerned international community. The Democratic nominee has most recently been charged with several abuses of classified information during her tenure as secretary of state, perjury before the U.S. Congress and illicit dealings with foreign interests buying favors from the State Department through donations to the Clinton Foundation. Conversely, the Republic nominee has been labeled alternatively as “crazy,” “insane,” and “deranged” by a growing number of observers based on his erratic and hate-filled speeches. This essay on the 2016 U.S. Presidential election reviews the literature to provide brief biographies of these presidential candidates followed by an analysis of recent trends that have influenced voter reactions to date. Finally, a summary of the research and important findings concerning the 2016 presidential election are provided in the conclusion.

When the Founding Fathers wrote Article II of the U.S. Constitution which stipulates that the president will be elected every 4 years, they also included specific criteria for eligibility including being born in the United States and being a minimum age of 35 years old. The Founders, though, likely did not foresee the day when the major candidates for the U.S. presidency were charged with so much political and psychological baggage or they might have reconsidered their eligibility requirements. The Democratic nominee, former Secretary of State Hillary Rodham Clinton, faces a wide array of charges concerning her mishandling of thousands of classified email messages on her personal computer and perjuring testimony to Congress during her tenure as U.S. secretary of state. Likewise, the Republican candidate, Donald J. Trump, is widely regarded as a lunatic of the first order by a growing number of observors, including many who supported him until he revealed his true thinking in a series of highly revealing stream-of-consciousness speeches that create new media firestorms every day.  To determine the most recent details and likely outcome, this paper reviews the recent literature to provide brief biographies of these two presidential candidates and their respective chances for winning the presidential election, followed by a summary of the research and important findings concerning these issues in the conclusion.

Hillary Rodham Clinton. The Democratic nominee was born in Chicago on October 26, 1947 and went onto earn law degree from Yale University School of Law in New Haven, Connecticut where she met her future husband and U.S. president, William “Bill” Clinton, a fellow law school graduate in 1975. Following their marriage, Clinton would go on to serve as the first lady of the U.S. during the period 1993 through 2001 during husband’s tumultuous tenure as president (Clinton biography, 2016). In 2001, Clinton was elected to the U.S. Senate and was later appointed as the 67th U.S. secretary of state in 2009 where she served until 2013 (Clinton biography, 2016). In 2016, Clinton secured the Democratic Party’s nomination, becoming the first woman in the U.S. history to become a major political party’s presidential nominee (Clinton biography, 2016).

The Clinton’s financial fortunes have improved dramatically since their departure from the White House in 2001 when they purportedly claimed they were “dead broke” and their mutual net worth is currently estimated at more than $100 million as a result of lucrative speaking tours by the former president and what some observers charge are shady deals elsewhere (Greenburg, 2016). Nevertheless, all current major polls indicate that Clinton is beating Trump in vital swing states as well as many states that have traditionally voted Republican and most observers agree that she will become the 45th president of the United States following the elections in November 2016.

Donald J. Trump. Born in Queens, New York in 1946, billionaire real estate developer Donald John Trump’s checkered track record as a real estate developer began in 1971 when he began investing in various building projects in Manhattan and continued into the 1980s when he completed the Grant Hyatt, making him one of the best-known real estate developers in the country (Trump biography, 2016). These projects were also the source of controversy that has characterized Trump’s career to date. Using his significant financial clout, Trump went on to pursue other eponymous investments including an airline, casinos and other major buildings, as well as a hit television series, “The Apprentice” and its spinoff, “The Celebrity Apprentice” (Donald Trump biography, 2016).

Although some close associates report that Trump’s interests in politics date back decades, his formal interest was demonstrated in 2015 when he announced he would be a Republican Party nominee for president (Donald Trump biography, 2016). After beating an unprecedented 17 other candidates in the Republican primaries, Trump was officially confirmed as the Republican candidate for president on July 19, 2016 (Donald Trump biography, 2016) having won more votes (13,406,106) in the primary elections than any Republican candidate in history (Hoft, 2016). It would be reasonable to suggest that Trump would able to leverage this heady start in the primaries and his successful professional management background to mount an effective presidential campaign, but most observers agree that his efforts to date have hurt him more than helped him and doubt that there is time enough left to repair the damage already done and these issues are discussed further below. 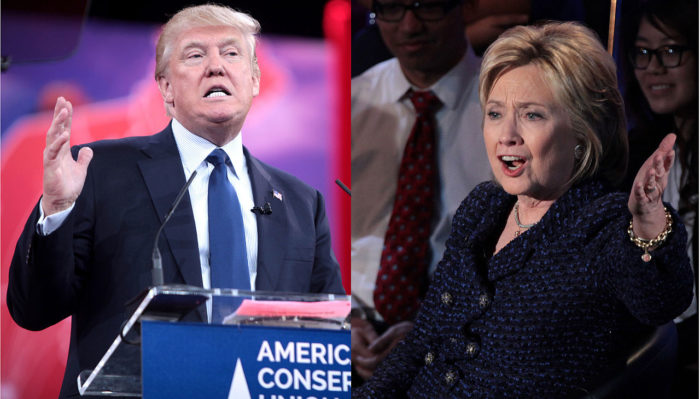 As this paper was being written, the Federal Bureau of Investigation released its findings of their investigation of Clinton’s alleged misuse of unsecured personal computers while she was secretary of state. The thousands of pages of heavily redacted copies of emails made it clear that there were hundreds of classified documents involved despite Clinton’s testimony to Congress to the contrary. Although several Republican leaders have called for perjury charges, most observers agree that no criminal charges will ever come of this incident but there are also questions concerning the Clinton Foundation and the donations made by foreign interests that allegedly influenced decisions at the U.S. Department of State during his tenure as secretary.

Moreover, these are just some of the most recent scandals involving the Clintons, and it would also be reasonable to suggest that they would be sufficient to derail any nominee’s candidacy in any other presidential election – but this is not a “normal” election by any measure. Indeed, a growing number of observers and professional clinicians have labeled the other candidate, Trump, as being “crazy,” “nuts” and “a flake,” among many other mental health-related pejoratives. For instance, following a week replete with inexplicable major gaffs by Trump, Noonan (2016) described Trump as being “insane” and added, “When you act as if you’re insane, people are liable to think you’re insane. That’s what happened this week. People started to become convinced he was nuts, a total flake” (para. 2). Likewise, other political observers characterize Trump as “goofy” and “deranged”:  “Donald J. Trump, the nominee of a party that, like the Democratic Party, has certainly chosen its share of poor candidates (from Warren G. Harding to George W. Bush) but never someone as goofy and possibly deranged as Trump” (Frank, 2016, para. 2).

Against this backdrop, it would appear that former Secretary of State Hillary Clinton is a shoe-in for the presidency, but the harsh reality remains that she is not trusted and actually disliked by a majority of American voters. In this regard, Frank (2016) concludes that “[Clinton] is perhaps the Democrat most vulnerable to Trump’s loathsome and increasingly strange campaign, just as Trump is perhaps the Republican most beatable by Clinton. The only reply is that millions of Americans are asking the same question: ‘Why-oh-why?’” (2016, para. 3). Other observers agree that while one of the candidates will most assuredly win the presidential election, the nation as a whole will be a loser no matter which candidate prevails. For example, Vatz (2016) argues that, “There can be no presidential winner in the 2016 election that will serve the country well” (p. 33). Indeed, many observers suggest that U.S. voters are being forced to accept a kakistocracy, or government by the worst or least-qualified candidates (Noonan, 2016). In this regard, Vatz concludes that, “Whether it is Clinton or Trump, the nation will be saddled with either the most ethically compromised leader since Lyndon B. Johnson in Clinton or the least qualified leader since Warren G. Harding in Trump” (p. 33).

At around 70 years old, neither presidential candidate is a spring chicken, certainly, but there are plenty of “Chicken Littles” in the mainstream media predicting gloom and doom for the United States and the entire world regardless of who wins the 2016 presidential election. While most polls show Clinton leading Trump across the board, polls also indicate that many American voters intensely dislike both candidates and most pundits concede that the 2 months remaining before the election and the four debates scheduled for September and October could still spell the difference in this presidential race. Although the sky may not be falling, the next 4 years will be interesting at best and exceedingly dangerous at worst given the turbulent state of global affairs regardless of who wins this presidential election.

We hope this example 2016 Presidential Election essay will provide you with a template or guideline in writing your own paper.  You are free to use any titles, topics, ideas, or sources provided, just make sure you properly cite the information.